Diabetes mellitus is a metabolic endocrine disorder due to an overall deficiency of insulin (Type 1) or defective insulin function (Type 2) which causes hyperglycemia.

Type 2 diabetes accounts for 90% to 95% of cases worldwide and is due to genetic and environmental factors with resultant insulin resistance and pancreatic beta-cell dysfunction causing relative insulin deficiency. This form of diabetes remains clinically in evident for many years.

A debilitating complication of diabetes mellitus is diabetic ulcers, which leads to increased overall morbidity in patients.

Atherosclerosis and diabetic peripheral neuropathy are the two main causes leading to a complication of diabetes such as ulcers.

a) Atherosclerosis leads to decreased blood flow in large and medium-sized vessels secondary to thickening of capillary basement membrane, loss of elasticity, and deposition of lipids within the walls. Further arteriosclerosis leads to small vessel ischemia.

b) Peripheral neuropathy affects the sensory, motor, and autonomic nervous system. There are multifactorial causes such as vascular disease occluding the vasa nervorum, endothelial dysfunction, chronic hyperosmolarity, and effects of increased sorbitol and fructose.

the ulcer became filled with pus and discharge an no amount of his medications were helping him. the patient came to Bangalore for treatment and the condition persisted the same for another 3 months-after many allopathic medications-

when the patient came to DrBanerjeeCures.in – a thorough examination and a case taking was done. the patient was under severe discomfort as he couldn’t fold his leg properly while walking – there was also severe irritation and itching at the site of the ulcer – the picture of his ulcer before treatment is attached – 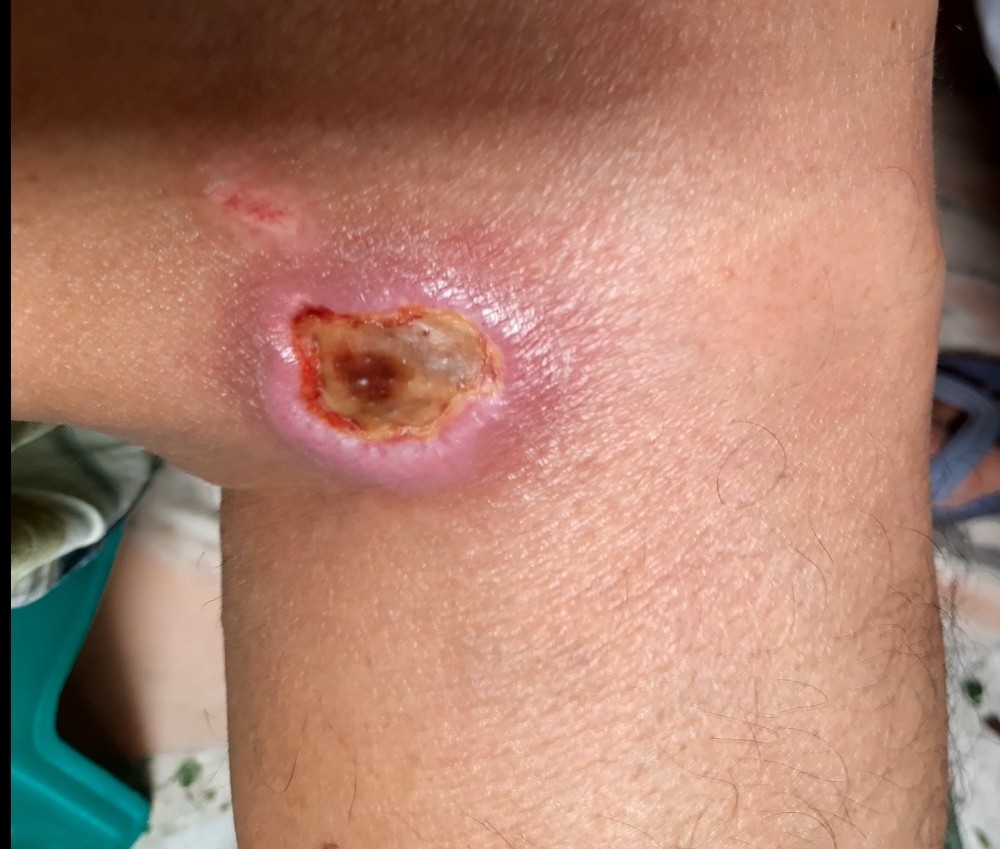 Patient was prescribed medicines and was asked to visit after 3 weeks.

Click one of our representatives below to chat on WhatsApp